I expect to pass through life but once. If, therefore there be any kindness I can show, or any good thing I can do to any fellow being, let me do it now, as I shall not pass this way again.

My parent’s divorced when I was just a baby; I saw my dad a few times through my early childhood years (My mom didn’t make it very easy for him to know me). I really didn’t get to know him until after I went into foster care, when I was fourteen.

I remember thinking, “who is this man?”

I recall our very first real trip together; we went to COSI to see the Antarctica exhibit (located at the old site). He bought me a penguin stuffed animal and it meant the world to me. I still have it! It was a very special day in our lives – we were truly reunited.

I remember when my dad came to NYC to see me graduate with my master’s degree. I know he worked really hard in high school and didn’t graduate because of his job, but instead he went to night classes, to earn his GED. He told me many times, how proud he was that I completed college and graduate school; he always told me that he was going to win the lottery and pay off my student loans, but the numbers just never worked in my favor. The night before graduation in New York, he stayed the night with me in my dorm room- he said he was too cheap and wanted to save money. I remember my girlfriends asking me if I wanted to go out and celebrate….and I was so proud to say that I couldn’t because my dad was there.

I also remember when I told my dad about being pregnant (and single) and he responded by saying that he couldn’t wait to meet his grandchild. My dad loved being a grandfather.

After I had Carter, my dad flew to NYC to see us. He was so happy to hold his grandson. I remember that I got a babysitter and I took my dad to NYC to see Rockefeller Center. We ate at Juniors and had cheesecake; we also took the subway; it was quite a different trip from our very first one at COSI!!! (but he still paid for everything!)

As a grandfather, that sense of joy never left his face. I think he was elated when I told him that I was going to move back to Ohio and raise my son here.

There is a strong nexus that ties Carter and my dad together. Carter will have memories for a lifetime about his Papa. When carter was a baby, my dad wouldn’t babysat him for more than an hour because He said he didn’t know the first thing about changing a diaper; he said he never changed one and wasn’t about to start!

Before my dad got his kidney cancer diagnosis in early December, he and my Uncle Jerry taught Carter how to play Chess. Carter couldn’t stop talking about how he “beat his Papa at Chess.” (with Jerry’s help). I bought Carter a chess board for Christmas with money that my dad gave me for his birthday; Carter asks me to play almost everyday-and he does not like it when I do not let him win! In my heart, I was hoping to see them play one more time, but I am so glad that I have this story and so many more, to share with him about his Papa.

My dad always found ways to think of others and he was always being thoughtful and kind. I have heard people say that my dad would do anything for anyone.

I know that he made sacrifices for me…

I know that he wanted me to live with a cohesive foster family, because he knew there would be benefits that he just couldn’t give to me. It took me a long time to realize that he made this sacrifice, so I could have the best future possible.

In adulthood, I would receive many odds and ends from my father’s thrift store finds. Sometimes I would laugh and other times, I would be surprised that he knew me far better than I realized.

For example, he gave me a gumball machine for my birthday in 2012, when I first started working at Columbus State. At the beginning of each semester, he would show up at my office with two containers of gumballs. He also could have just bought onecontainer, but he knew it wouldn’t fill it to the top. He would always joke around and say they weren’t cheap and he would tell me to look for any wheat pennies. The machine is a big draw for students (and for Carter)!  It is because of my dad’s love, that students stop by and enjoy his gesture of kindness.

Last week I stopped by my office. The new semester starts this week. I happened to glance over at the gumball machine and it was completely empty. My eyes teared up. I was reminded of his generosity and thoughtfulness. He was always completing random acts of kindness. 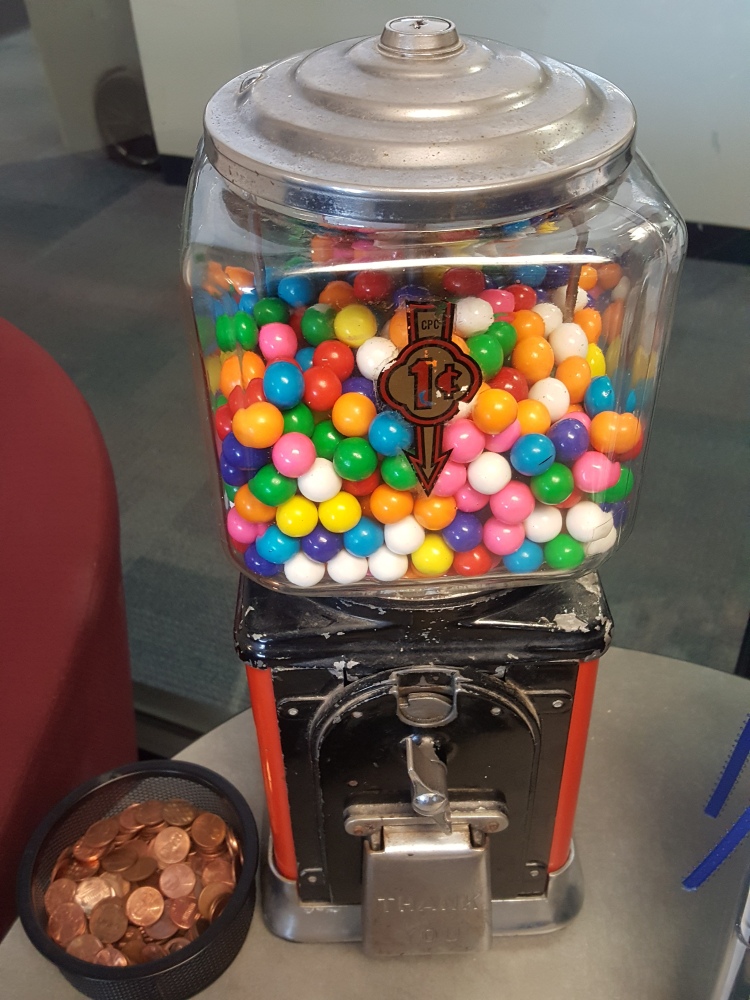 This brings me to concluding thoughts…..

When I was at THE OSU James Cancer Hospital On December 3rd for the first time, I stopped in the Chapel to pray; I picked up a copy of Our Daily Bread. This is the prayer that was written for that day-

“Father God, Your heart beats for the vulnerable…. Help us to love your people as you love them, for we are made in Your Image. “

True faith demands not only our words, but our actions. This statement leads me to the prayer that can be found on January 10th, the day my dad peacefully passed away at home-

“Lord, what do you want me do for another today? Lead me. And may that person see a glimmer of You.”

I know I saw that glimmer in my father; I won’t ever forget what his example, so I can pass his lessons of generosity to his grandson. I have faith that his random acts of kindness were expressions of his faith; he revealed the tender mercy of God through his giving heart.

25 years later, I finally can answer that question I asked at age 14. Do you remember my question?

He is…..my father and Carter’s Papa – He will always be loved and remembered.

*Post-Script: the day I returned to work following my leave of absence, I found an amazon box addressed to me. I opened it and found a note and gumballs from my college mentor. She had attended my father’s service; her act of kindness meant the world to me.